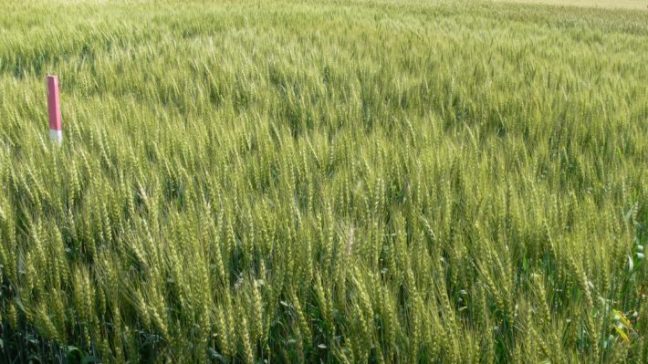 Synopsis: The recent warm temperatures have helped to green up the wheat especially in the southwestern part of the province. Field work has been limited to some nitrogen and red clover applications, with a few acres of sugar beets, onions, carrots and spring cereal planted. Soil erosion has been more severe on fields this winter and early spring and worse on the heavier soils than would normally be expected. It was a great maple syrup year. Many producers experienced record production. Some say this means it will be a good crop year.

Dale Cowan reported that the number of heat units from mid-October to the end of fall was not enough to germinate the crop and actually there was more heat accumulation in January to early Feb. Overall the wheat crop looks small for this time of year. The best guess is that 15% of the wheat was planted in September, and probably more than that east of here, 10% up to mid-Oct and 75% after that. Some fields did not emerge, and shallow planted wheat has heaved. It is estimated that in Essex and Lambton 75% of the wheat crop will be left to harvest. In West Lambton it is likely that 50 to 66% of acres will be replanted, 80% to soybeans and 20% to corn. In West Elgin, it is likely that 60% of the fields will not make it. $7.00 forward contracts and high straw prices will save more wheat acres than would often occur.

October wheat has not tillered and would benefit from an early application of nitrogen to boost growth. A little nitrogen has been applied. Many growers are splitting the nitrogen as they are still unsure of how the wheat is going to progress.

Red clover application on wheat is down by about two-thirds of normal. Some fields may still have clover applied later. Many not putting on red clover as they are concerned about too much clover growth in the poor wheat at harvest. The clover that has been applied to fields that looks good and the farmer plans to keep. Single cut is probably the best for fewer hassles at harvest.

Where stands are poor, make sure weeds are controlled. Also, get out and scout the crop for early diseases. To manage large gaps, consider planting winter wheat in those areas to provide cover and not interfere with harvest. If you plant a spring cereal in the gaps, the crop will go as feed, but you will have the straw. Agris is sold out of oats to patch wheat. Spring wheat planted into winter wheat will head 10 to 14+ days later. If the crop is to be taken out and planted to corn or soybeans wait until plants are actively growing to get a better kill. April 25 and May 15 are the deadlines for insuring spring cereals with Agricorp, depending on area. Watch for mosaic virus if killing winter wheat and planting spring wheat, leave time in between killing and planting. Watch for crown rust in oats.

There is a lot of chickweed growing in some fields. If chickweed was not controlled last fall, spray with Refine (the best treatment in P. Sikkema trials). Refine has no residual so red clover can be planted after the Refine is sprayed. Poor spots in early wheat appear to have snow mould but without mycelium. Internal drainage and structure in fields are important. Weak areas will bring yield average down.

Straw will likely be scarce this year. Some are already getting calls about where to source it. Straw is currently selling for up to 14 cents a pound at auction. Straw may drive growers to keep wheat.

Soybeans: Soybean acreage will likely be down this year. Some companies are still looking for seed growers.

Weed Control: Weed growth has been slow to date. Very few annuals present but the biennials are growing well.

Horticulture Crops: A few carrots have gone in with onion planting beginning soon. There are 200 acres of sugar beets planted to date which went into poor conditions. Sugar beet acreage will be about the same this year at 9,600 acres. This past winter, the sugar beet plant experienced the worst sugar recovery ever. They speculate that it was caused by environmental issues from the last growing season. As a result, the sugar beet payments to growers were low. The beets stored well over winter. Severe Cercospora infection may have had a role to play in the low sugar recovery. The company is pushing the use of more tolerant varieties. Mancozeb requires multiple sprays for disease control. Four to five sprays aren’t enough, and field crop growers are not used to spraying that much. Growers have to spray well into September to maintain control. The Mancozeb task force recommends that sugar beets be able to keep use of Mancozeb.

Tomato acreage is down this year. Con Agra (Dresden) has made a big cut of 12% to acreage and the others are down 3 to 4 %. Price per tonne has not been determined, but it will not be above last year’s price. The processors want high yields and good colour. There has been significant adoption of automatic planting technology. Last year there were a couple of demos. The plant tape did not work out. There will be five automatic commercial planting units in the area this season.

Corn: Corn acres will likely be up 3 to 4 % this year. If wheat were ripped up, corn would be the preferred crop. Grain Farmers of Ontario estimates a 5.7% acreage increase for corn.

Ear moulds and DON was a consideration when growers made hybrid selections this year. Many still used hybrids they were familiar with even if DON was high, but they planted less acreage of these hybrids compared to previous years. A diversity of hybrids on the farm instead of only one or two hybrids can reduce ear rot and potential DON risk.

In-field management strategies such as fungicides is another way growers will try to manage ear rot and DON risk this year for those susceptible hybrids. The first Pioneer hybrid with a Leptra trait for Western Bean Cutworm resistance will be introduced for plots this year (P9946 AML).

Pioneer seed corn acreage will be similar to last year, with smaller acreage of a larger number of hybrids. Ben Rosser’s projects for the year include strip-till with fall vs spring fertilizer placement, and spring placement (broadcast vs strip vs starter on the planter), and phosphorus loss measurements on the different placements. Ben is also looking for strip-till co-operators to evaluate starter fertilizer (banded or in-furrow) response on fertilized strips. It entails doing four side-by-sides with starter fertilizer on and off on planter on fertilized strips. Growers are free to select fertilizer products and rates, just need to document what is applied. Contact Ben if you know of a co-operator Ben.Rosser@ontario.caor if you want more information on the projects.

Drainage: There is concern about roots in tile. There have not been many reports so far. Walk fields and look for wet areas in fields. Oat and radish cover crop roots, planted after soybeans have plugged tiles in Indiana.

From Peter Sikkema: Waterhemp has been confirmed in seven counties in Ontario: Essex, Kent, Lambton, Middlesex, Huron, Haldimand and Wentworth. There could be several reasons for waterhemp movement in the province including movement with equipment (tillage and harvest) and movement by water fowl. Atrazine-resistant waterhemp was previously reported, but Sikkema’s group has found multiple fields with metribuzin-resistant waterhemp near Petrolia, Ont. This could potentially be the first report globally. Of concern is the high level of resistance with 2 kg/ha active metribuzin having no effect.

REMEMBER – herbicide mixing sequence order is important! WAMLEGS mixing protocol is attached. Remember to always refer to the label prior to mixing any chemicals.