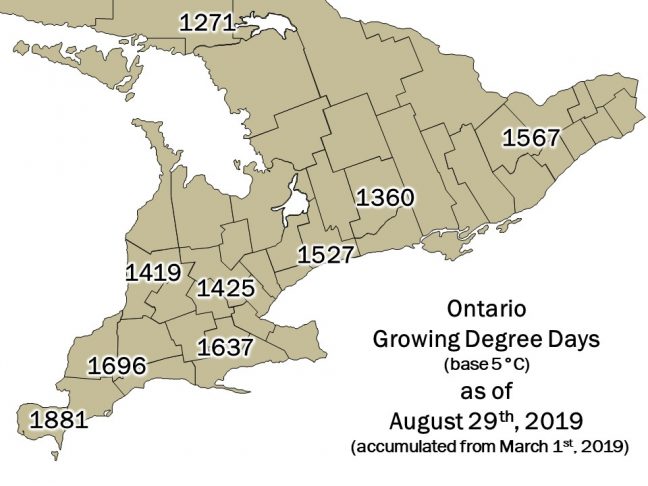 Temperature – Cooler weather combined with morning dew and some precipitation has been conducive to the development of plant pathogens in many of the vegetable growing regions in the past week. Harvest of early planted crops is well underway or finished in many growing regions as remaining fields continue to track toward harvest.  The Durham, Huron, Peterborough, Simcoe, and Sudbury growing regions are still tracking marginally to significantly behind their average degree day accumulation; while the Chatham, Essex, Kemptville, Norfolk and Wellington growing regions have all caught up to their average degree day accumulations.

Rainfall – Precipitation was once again sporadic across most regions with some receiving about 5mm to others with 30+mm in the past week. Norfolk and Durham counties have well exceeded their average August rainfall totals, while remaining regions continue to progress toward their respective averages.

Brassica Crops – Alternaria is present in most regions across the province. Conditions have been favourable for black rot and fusarium wilt. Flea beetles and diamondback moths continue to be high this year.

Carrot – As the weather cools, risk of disease becomes higher. Leaf blights are starting to show up in carrot fields. Check for white mold development between rows as canopies have closed. Consider trimming back canopies which has been shown to reduce white mold while not affecting yield.

Garlic – Planting season is quickly approaching. If you are buying planting stock, ensure that you test cloves for bulb and stem nematode. Even cloves with an intact basal plate and no observable damage may have nematodes. There will be another full day workshop in Guelph on December 4th that will cover every part of garlic production including clean seed, cultivar selection, seeding density, nutrient testing, scape removal, weed control, crop insurance, harvesting, grading, storing as well as scouting/pest management. To register, call the Agriculture Information Contact Centre at 1 877-424-1300.

Onions – Downy mildew has been confirmed in Ontario transplant onions (picture below); but away from major onion growing regions. Most areas have not had favourable conditions for sporulation and infection. Harvest is underway in transplants and some early direct seeded onions. The level of thrips has reached the spray threshold in most areas.

Sweet Corn – Over the second half of August, there were several key weather patterns that brought with them a higher chance of corn earworm migration (picture below) into the Great Lakes basin.  The event occurred fairly regularly (August 12, 16, 19, 26 and 28th) suggesting that Southern Ontario is likely at a higher risk of corn earworm infestation as the final planting reach the silking stage.

When corn earworm are present in an area, protect corn silks as soon as they emerge until they dry down.  Any green silk is an attractive egg laying site for the female moths.