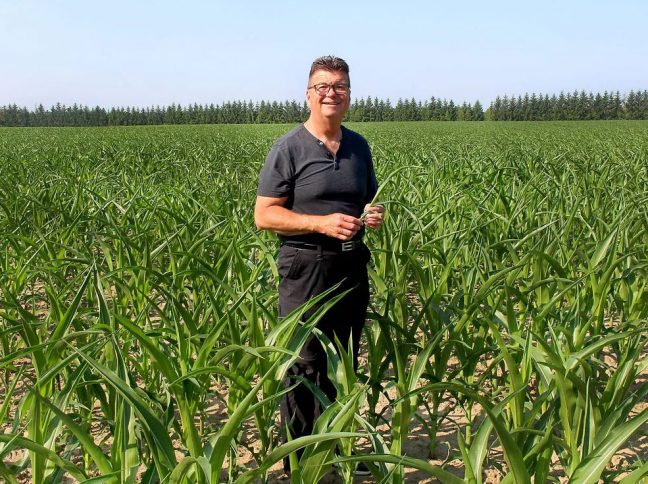 Kim Cooper grew up in the city, but he discovered a love of agriculture working at the former M.J. Smith Grain Company, which developed into a career that lasted more than four decades. Cooper, who writes a popular weekly agriculture column for The Chatham Daily, is retiring on Aug. 2. Photo taken on the outskirts of Chatham on July 5. Ellwood Shreve/Postmedia Network – PHOTO BY ELLWOOD SHREVE /Ellwood Shreve/The Daily News.

Agricultural hall of fame association vice-president Alice Uher said this year’s nominees are “four men who have provided a positive influence on agriculture in the Chatham-Kent community and beyond.”

Cooper, a Wheatley resident and a former agricultural specialist for the Municipality of Chatham-Kent, had a four-decade career that took him to more than 30 countries working for different agricultural organizations.

Known as the “Ag Guy,” Uher said Cooper had “provided a wealth of knowledge, agricultural information and guidance to many groups, organizations and committees.”

She added he had helped many local businesses to grow and expand in the global marketplace.

Uher also noted Cooper, a former longtime columnist for The Chatham Daily News, had “also educated and informed the public through columns in newspapers, farm magazines and radio programs.”

Denys, who farmed in Raleigh Township and served on council, was described by Uher as “selfless in his efforts to support both local and Canadian agriculture.”

She said this included his efforts to create crop insurance, promoting farm education events, researching innovations for farming and “for being a strong advocate for all residents while on Raleigh Township council.”

“He is recognized as an educated and well-informed leader,” Uher added.

“He recognized the extra value for growers from the newest genetics and benefits to quality, yield and research that certified seed offers,” Uher said.

Dr. Pitblado, who died Nov. 11, 2009, researched vegetable pest management and taught thousands of students at the Ridgetown Campus of the University of Guelph, “sharing his excitement for the development of insect and disease strategies for horticultural crops,” Uher said.

Another of Pitblado’s achievements was helping to develop the Ontario Weather Network.

“He had an unstoppable passion to investigate new possibilities for Ontario’s fruit and vegetable industry,” Uher said.

South-Kent Coun. Mary Clare Latimer, council’s appointed representative to the hall of fame association, praised the committee for its “hard work at discerning and selecting these most deserving individuals . . . for demonstrating outstanding and consistent achievement in the realm agriculture and service to the rural community of Chatham-Kent and beyond.”

The ceremony to officially induct the new hall of fame members will take place on Nov. 22 at the Hidden Hills Golf and Country Club.